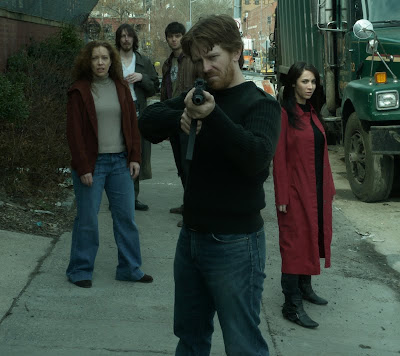 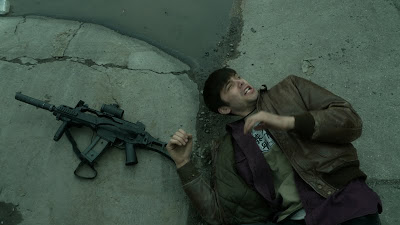 Today was the biggest day of Pandora Machine to date. I think we had a cast of 21 or so plus a crew of 3 (which for us is a huge crew). And we got off something on the order of 150 different shots. Most of those shots were completely different setups.

We shot in fabulous Gowanus, Brooklyn.

There were a lot of heroes today, but I gotta give it up to David Ian Lee. He was the fight director and he coordinated all the 16 fighting zombies. So he ended up de facto being the 1st AD. We don't usually use an AD so it was quite luxurious for me. Especially because David also storyboarded a good 3/4 of the day's shots. Heck, all I had to do was be the cameraman! ;-)

Because the day began so bright and sunny we had to hide in the shadows of buildings. And because we had so many guns we had TCD on set and, I gotta say, they were delightful.

Tom Rowen lies on the ground being a whimpering pantywaist after he discovers he (Eric) can't really handle a gun.

Our entire cast and crew today. I can't thank you guys enough. Everyone was fantastic, professional and willing to put up with being very dirty and very far away from holding (read: "bathrooms"). We got to go to lunch with almost everyone (some people took the option to take off after they were wrapped to do things like go to work... whatever that is. ;-)

We had a massive fight with all these people and between David's preparation and everyone's focus we managed to get it all done in 6 hours. Yeah, that's longer than I like to go before we go to lunch and I feel a bit bad about it. But at least we wrapped the day by 5:30pm (for an 8:30am call.)
The Evil Horde:
Lauren Ferebee
Tarantino Smith
Thane Floreth
Jorden Feltner
Ryan P. J. Feltner
Micah Chartrand
Kari Geddes
Gloria Rice
Ingrid Nordstrom
Gwen Lawson
Ridley Parson
Rebecca Comtois
Christopher Frederick
Hurley Graham
Isaiah Tanenbaum
Nicholas Reinhardt 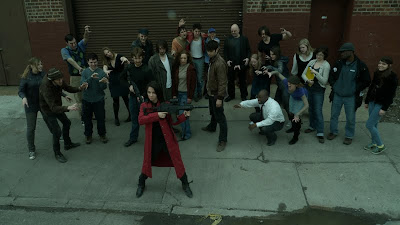 Here Nat Cassidy and Tina Tanzer see the Alpha for the first time. 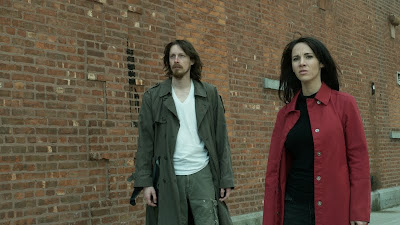 Today's picture wrap in Gowanus. Like I said, TCD were really great. You'll remember these guys from our first day of shooting. Yes, that's Tina wearing a police cap and it looks tres tres supercop on her. 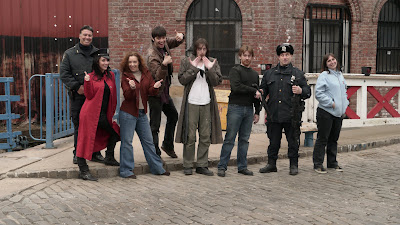